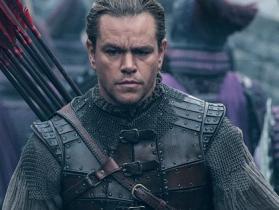 You just knew Jimmy Kimmel's night as host of the Oscars wouldn't be complete with a dig at Matt Damon and it came in the form of a "tribute" to Matt Damon and his film 'We Bought A Zoo'.

"That's the thing about Matt," he says. "He has almost no discernable talent... but it works."

When Damon made his way onstage with Ben Affleck, the pair was announced as "Ben Affleck and guest" before the actor was hilariously played off before he finished.