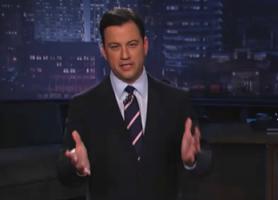 Jimmy Kimmel got tearful as he recalled the impact David Letterman has had on his life and career last night.

"Even though it looked like every other talk show – it wasn't," Kimmel said during his monologue. "It was totally original, primarily because of the host of the show – who, a lot of time – seemed embarrassed to be there."

Kimmel was soon "drawing pictures of Dave on the covers of all my textbooks at school," had a Letterman-themed birthday and license plate that said "L8NITE."

"We had no VCR, so I would have David Letterman viewing parties at my house in the middle of the night. My friends who also loved the show would come over... at midnight and we would drink soda and watch the show."

"Looking back, I figured out why none of the girls at school wanted to have sex with me."

"Not only did I learn how to do everything from Dave," Kimmel explained, "the reason I have this show is because the executives at ABC saw me when I was a guest on Dave's show and hired me to host this show. So I want to thank Dave and his writers and producers."

Kimmel then encouraged viewers to skip the rerun of his show on Wednesday and watch Letterman's farewell instead. The host announced earlier this month that he wouldn't be doing a new episode opposite Letterman "out of respect" for his idol.

"I would like it if you would make sure to watch that instead of our show," he said. "We will not have a show on tomorrow night but please do not watch it... especially if you're a young person who doesn't understand what all the fuss is about."

"Dave is the best and you should see him."