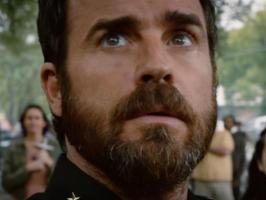 Jimmy Kimmel felt that it was time Justin Theroux should be nominated for an Emmy for 'The Leftovers'.

So teamed up with Jennifer Aniston (photos

) to pull a prank on her husband and gain consideration for his role on the show at the same time.

"I feel like HBO could be doing a better job of promoting this for you, we had some experts adorn your car in a way that is going to bring you a lot of attention."

"This is what people will see as you drive around town. We even went so far as to put a hood ornament on the car," he laughed at the Emmy statuette on the front.