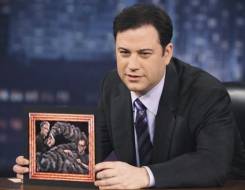 At the start of a press session for ABC Entertainment president Stephen McPherson, the first question came from a 'reporter' with a face that was all too familiar, even if the false name wasn't -- it was Jimmy Kimmel.

Kimmel, dressed as a reporter complete with a writing pad and ball cap, said he wanted to ask McPherson about recent rumors that ABC might make a bid for Jay Leno after his contract at NBC's 'The Tonight Show' expires.

"If that were to happen, would Ted Koppel get fired or how would that work?", he asked. (Koppel has of course been off 'Nightline' for several years now). "If you were to talk to Jay Leno now, wouldn't that be contract tampering, wouldn't it be illegal?" Before finally asking, "How do you keep your hair so nice?" and "Are you at all afraid that if you do replace Jimmy Kimmel he might do something crazy to you or your car?"

Jimmy Kimmel, who currently hosts ABC's 'Jimmy Kimmel Live' nightly, will be the odd man out if ABC hires Leno. So the fact that he was making fun of the situation shows ABC and Kimmel are on the same page no matter what happens and that's definitely a positive for the comedian's fans.

As is the praise that followed from McPherson: "I cant say enough about Jimmy. His show has just exploded this year. He's done an amazing job. This show creatively is firing on all cylinders and we're hugely supportive of it. As for Leno, I can't believe they're gonna let this guy go at the top of his game. If that happens, I guess we'll look at it at that time and Jimmy will be involved in those discussions and that will be that."

Leno is said to be privately unhappy about his planned departure, and NBC has said it is looking for "another role" for him at the network -- including a possible move to primetime TV.