Jimmy Kimmel's Baby Boy Helped End Feud With Leno: 'Jay and I Have Made Peace' 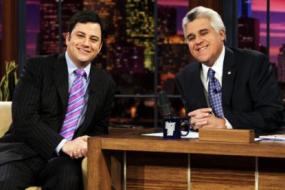 Kimmel and Leno's feud began in 2010, during the now infamous shake-up that saw Leno return to replace Conan O'Brien as the host of 'The Tonight Show' months after handing it to him.

Kimmel had some harsh words for Leno, impersonated him on 'Jimmy Kimmel Live!' and admitted he enjoyed "sucker-punching" the comedian.

In an appearance on Leno's show, when asked, "What's the best prank you ever pulled?," Kimmel responded: "I think the best prank I ever pulled was, I told a guy that five years from now, I'm going to give you my show, and then when the five years came, I gave it to him and then I took it back almost instantly."

"I always feel bad if I hurt anybody's feelings, but I don’t believe Jay Leno has actual feelings," Kimmel later said at the time, "and he doesn't seem to be that worried about other people’s feelings."

However, Kimmel says the birth of his son, who underwent surgery for a congenital heart defect, helped him end the feud.

"Jay and I have made peace," he tells THR. "After my son had his operation, he called me and he was very nice."

"What he did was, you can't argue with his success, his longevity. I will say, when I was in high school, going to college, he was one of my all-time favorite comics."