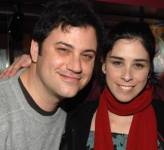 ) have broken up, ending a relationship that provided plenty of hilarious skits on Kimmel's late night show.

No reason was given for the break-up, but their respective reps have confirmed the split. The breakup comes just a few months after Kimmel, 40, and Silverman, 37, celebrated their five-year anniversary.

An occasion that was marked by Silverman announcing she was 'f*cking Matt Damon' during an appearance on Kimmel's show. The resulting video in which she sings of the affair has been one of the funniest to date on the show. In part to its popularity, it was followed by a star-studded confession from Kimmel of his own affair in which he let the world know he was 'f*cking, Damon's best friend, Ben Affleck'.

Silverman, was a frequent guest on Kimmel's talk show, but that will certainly change now that the two have split up.