Jimmy Fallon Does Skit With Barb Returning to 'Stranger Things' 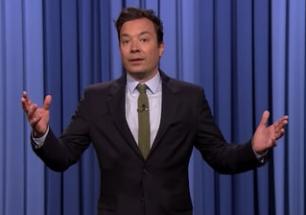 Jimmy Fallon stars as Steve in a skit that sees Barb returning from the Upside Down to confront Mike, Lucas, Dustin and Eleven about leaving her there.

When Barb is asked during the sketch if the return of her character mean's she's appearing on season two, Barb replied: "No, because Barb is getting her own spinoff, Orange is the New Bitch."

Fallon also played 'Stranger Strings' with the kids from the hit show, including Millie Bobby Brown, Gaten Matarazzo, Caleb McLaughlin and Finn Wolfhard where they take turns reading unknown facts about each other, then spraying silly string on who they think each fact was about.