Jimmy Fallon Rolls Around On The Floor With Heidi Klum 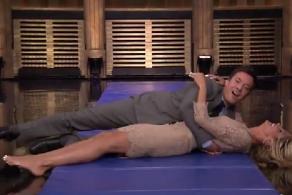 ) played a little game of 'This Is How We Roll' on last night's 'Tonight Show' -- but after Klum wasn't satisfied, she showed Jimmy how two people should really roll around.

But the 'Tonight Show's wife is probably hoping he doesn't switch to Klum's version after getting down with the former supermodel.