Jim Carrey Gives Strange Rambling Interview at NYFW: 'There Is No Me' 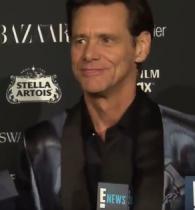 "There's no meaning to any of this," Carrey began. "So I wanted to find the most meaningless thing that I could come to and join and here I am. You got to admit, it's completely meaningless."

When Sadler was informed the party was celebrating icons, Carrey replied: "Celebrating icons? Boy, that's just the absolute lowest aiming possibility that we could come up with... I don't believe that you exist but there is a wonderful fragrance in the air."

He then broke into what appeared to be a James Brown impression.

"I don't believe in personalities. I believe that peace lies beyond personalities, beyond invention and disguise, beyond the red 'S' you wear on your chest, that makes bullets bounce off."