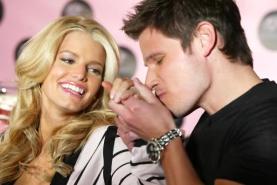 ) was unexpectedly candid during an interview with Kelly Evans on CNBC's 'Closing Bell'.

On the show to talk about the 10th anniversary of her successful clothing brand, Simpson was asked about advice for other entrepreneurs and specifically what her biggest financial mistake may have been.

"The biggest money mistakes? I don't know. For some reason I thought of my first marriage!," laughed Simpson.

"That's actually a common answer, believe it or not," replied Evans.

Simpson and Lachey were married between 2002 to 2005. The singer has previously said she had remained a virgin until her marriage.

"My business manager and I have been together for 16 years now. he's one of the first people that I met coming into New York City, and I trust him with everything. We've made really great investments, we haven't really had any mistakes," she then explained.

"I'm definitely a person that is all about taking a risk and everything to me is kind of a 'why not?'. I take an opportunity by the reigns and just go for it…when we started, it was only shoes and now it's grown so big. I'm just counting my blessings."

As for where she's going in the next five years, the now mother of two said: "I always say I'm ready for another billion."