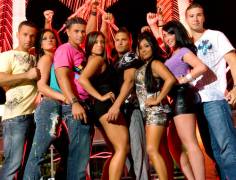 MTV has announced that almost all of the original cast will be returning for an all new-series called 'Jersey Shore Family Vacation'.

One name noticeably missing from the list is Sammi 'Sweetheart' Giancola.

'Jersey Shore' aired from 2009 to 2012. Many of the cast members have since married and had kids so things should be interesting.

As the title suggests, it will feature the 'Jersey Shore' cast on vacation together.