Jerry Seinfeld Rejects Kesha's Hug On The Red Carpet: 'No Thanks' 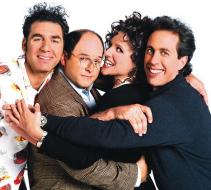 Kesha interrupted an interview Seinfeld was doing with a reporter before the 'Night of Laughter & Song' event for a hug from the comedian.

However, Seinfeld backed away and said "no thanks." When the singer asked for just a quick one instead with a "Please?", Seinfeld declined again and Kesha walked away.

Seinfeld laughed and told the reporter he "didn't know who that was."

After being told who it was, he remarked: "Oh, okay. Well, I wish her the best."