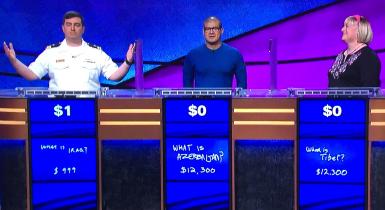 A 'Jeopardy!' contestant eked out an unlikely victory Tuesday after losing nearly all of his money on the last question.

Manny Abell, a naval officer from Lacey, Washington wagered $999 of his $1000 on the final Jeopardy question: "What country bordered the Caspian Sea and the Persian Gulf?"

The returning champion lost all of his wager with the incorrect guess "Iraq" -- but, with his competitors wagering every dollar of their tied $12,300 totals -- that $1 was enough to declare him the winner.

It was a wild finish since Abell's incorrect answer was the first one revealed. Things looked bleak for him but after both of his competitors got the answer wrong, it wiped out their winnings. The correct guess was Iran.

Trebek called it the "smallest win in many, many years."

Ironically, even though Manny Abell retains his crown and moves on as the champ, the other two contestants took home more than he did on last night's episode since the second and third place contestants receive $2000 and $1000, respectively.