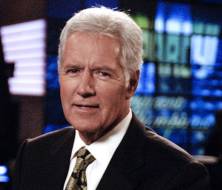 The 73-year-old host is being recognized by Guinness for the "most game show episodes hosted by the same presenter."

Trebek, who has hosted the game show since 1984, has hosted over 6,800 episodes but says he's not done yet.

"I want to continue for a few more years," he says. "It's the kind of record that can be replaced."

"The good news is as long as I keep hosting the program, I stay ahead of whoever's in second place and that makes me feel good."

"It's an honor to hold the Guinness World Record for hosting Jeopardy!, which I've often said is the best of reality TV."

"We have had incredible support from our viewers for the past 30 years, and without them, I wouldn't have set this record."