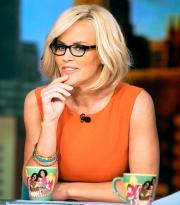 Jenny McCarthy is scared she has an enemy of a very powerful woman: Oprah Winfrey.

McCarthy, who had a handshake deal for a talk show on Winfrey's OWN, walked away from the network after she was offered a spot on 'The View'.

"I'm scared of Oprah," McCarthy admitted on 'Watch What Happens Live'. "I did a deal with her for five years, but we, we kinda shook hands. I would be scared she would beat me up."

"It didn't work out," McCarthy said, implying she walked away to take 'The View' job. "I left. I am terrified... I would be like OH NO if we ran into each other."

"So you think you're on her list?," asked host Andy Cohen.

"I'm sure there's probably a lot of people on her sh-t list," replied the 40-year-old. "I'm probably number four."

For her part, Oprah says she doesn't have a "sh-t list." Not that we'd expect her to confirm it.

"Jenny McCarthy, I don't have a shxt list," she addressed on Twitter. "If I did you'd never be on it. Wishing you only good fortune, love and light."