Jenny McCarthy Criticizes Charlie Sheen For Not Disclosing He Had HIV 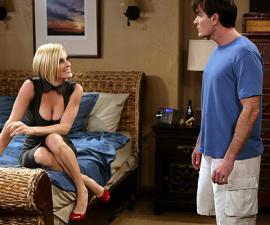 Jenny McCarthy is criticizing Charlie Sheen for not disclosing he was HIV positive.

McCarthy took to her SiriusXM radio show this week to voice her opinion after Sheen admitted he's known about the diagnosis for four years.

She said actors must disclose health issues such as cold sores before taking a job, and wondered why Sheen didn't disclose something as big as HIV.

"If I have to be upfront about a herpe how could you not be upfront about HIV?" she asked. "Being on Two and a Half Men myself and being on the show and playing a love interest you would think there would be some type of, I don't want to say, criminal issue but I don't even know how to feel about that," she said.

"I'm like, 'Wait a second. If I have to be upfront a herpe, how could you not be upfront about HIV? That could've been some valuable information."

"I wouldn't sleep with anybody until I got the right paperwork, so the fact that playing his love interest on the show, I go like ick, ugh, that's not fair. I'm STD-phobic because of all the stuff with Evan's health."

"He's sick and it's awful, but man he's going to have to take some major accountability with many people in his life."

McCarthy played one of Sheen's love interest for eight episodes of the CBS show between 2007 and 2011.