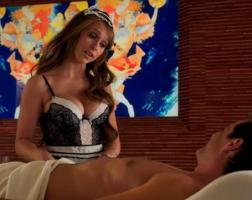 Lifetime has cancelled 'The Client List' after two seasons.

) as a mother who becomes a masseuse at a happy-ending massage parlor to make ends meet, had premiered in April 2012.

The series co-starred Loretta Devine, Colin Egglesfield, Cybill Shepherd and Brian Hallisay, who the actress is engaged to after meeting on the show.

The cancellation comes five months after Hewitt found herself in a "creative standoff" with Lifetime over how her real-life pregnancy would be handled.

Hewitt reportedly wanted her pregnancy written into the show and fiancee, Hallisay, to play the father of the child she was expecting to make fact meet fiction but Lifetime nixed the idea.

Fans of the drama won't be happy given the second season ended with a cliffhanger that saw police on the trail of Hewitt's character after she burned down her own massage parlor, killed a wanted criminal, and was confronted by the men in her life who wanted answers about her secret life.

'The Client List's season two finale was seen by 2.1 million viewers, down from the season one finale of 2.7 million.