Jennifer Lawrence Talks Sleeping On Plane, Turns Out She Had Real Bed 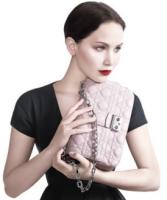 ) tells Conan O'Brien about the whirlwind tour she's been on promoting the 'The Hunger Games'.

So when she finally got the chance to sleep on a lengthy plane journey plane, she was so psyched to sleep she dislocated her toe by hitting one foot with the other.

"That can happen," she says.

The audience sympathizes since no one likes to sleep on a plane to begin with but the picture in everyone's heads is shattered when Jennifer Lawrence rolls a clip of her excited state over catching some Z's to reveal a real bed on a plane.