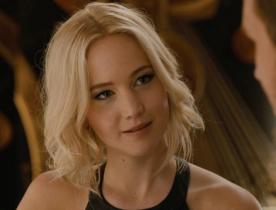 ) has revealed she was made to stand as part of a "naked line-up" early in her career.

The 27-year-old spoke about her experience at Elle's Women in Hollywood event in Los Angeles on Monday night.

"When I was much younger and starting out, I was told by producers of a film to lose 15 pounds in two weeks," she began.

"During this time a female producer had me do a nude line-up with about five women who were much, much, thinner than me. We stood side-by-side with only tape on covering our privates."

"After that degrading and humiliating line-up, the female producer told me I should use the naked photos of myself as inspiration for my diet."

Lawrence said when she told another producer about the weight loss demands: "He said he didn't know why everyone thought I was so fat, he thought I was 'perfectly f***able.'"

"I let myself be treated a certain way because I felt I had to for my career," she explained.

"I'm still learning that I don't have to smile when a man makes me uncomfortable. Every human being should have the power to be treated with respect because they're human."

The Oscar winner said that hearing the women who have come out against Harvey Weinstein has been "oddly unifying."