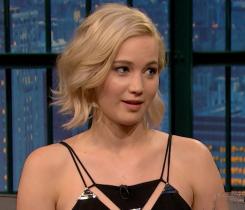 ) is used to being the center of attention but the A-list actress admits that she wasn't prepared when nude photos of her were leaked in 2014.

"It's scary when you feel the whole world judges you," says Lawrence.

"I think people saw it for what it was, which was a sex crime, but that feeling, I haven't been able to get rid of it."

"Having your privacy violated constantly isn't a problem if you're perfect. But if you're human, it's terrifying."

"When my publicist calls me, I'm like, 'Oh, my God, what is it?' Even when it’s nothing. I'm always waiting to get blindsided again."

Lawrence also talks about her relationship with director Darren Aronofsky.

"We had energy. I had energy for him. I don't know how he felt about me," she says.

"For the past year, I've been dealing with him as just a human. I've been in relationships before where I am just confused. And I'm never confused with him."