Jennifer Garner: I Use West's 'No Disrespect To Ben Affleck' All The Time 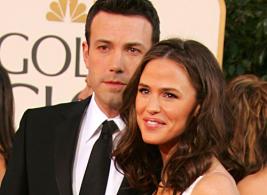 Jennifer Garner is joking that she finds herself using Kanye West's now infamous #NoDisrespectToBenAffleck" hashtag all the time with her husband.

West used the hashtag during his feud with Jimmy Kimmel as he wrote: "Jimmy Kimmel put yourself in my shoes. Oh no, that means you would have gotten too much good pussy in your life."

"You can't put yourself in my shoes. Your face looks crazy. Is that funny? Or if i had a kid say it would it be funny? Should I do a spoof about your face or you f--king Ben Affleck #NoDisrespectToBenAffleck and #AllDisrespectToJimmyKimmel."

"I say that all the time," Garner told Kimmel. "I say, 'You look crazy. Hashtag, no disrespect to Ben Affleck.' Just on an average day, that's just how I might greet him in the morning."

The actress also laughed the Boston Red Sox and St. Louis Cardinals World Series was the only thing Affleck was paying attention to right now.

"That's really all that's happening at my house right now. I don't know if the kids are being fed. And trick-or-treating might be canceled if there's a game seven."

"Once you get into the playoffs, it's a little bit like, somebody just made an error so now I have change where I'm sitting in the house," she explained.

"It's a little bit ridiculous. The sweatshirt goes inside out, the rally cap goes on. But he's not kidding. He's really not kidding. Like, you would go to a game with him, and if they lose, he tells his friend, 'Sorry, I have tickets for tomorrow, but you can't come. We lost because of you."