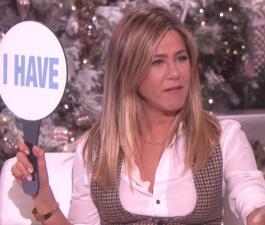 But Aniston's revelation was almost as juicy as the movie's all-star cast.

During a game of 'Never Have I Ever', both Jennifer Aniston and Ellen DeGeneres admitted to being members of the mile high club.

The 47-year-old and the host held up their 'I have' paddles in unison.

"Never have I ever joined the mile high club in the cockpit," Ellen continued.

Aniston kept her paddle up confirming the suspicion.

"Never have I ever... with the pilot?," Ellen wondered.

"Oh God," Aniston trailed off, reluctantly keeping her 'I have' paddle still raised.

"While eating a mini bag of peanuts?," Ellen said and promoted Jennifer to finally take the paddle down.

"What? No, well that's just disgusting," she laughed.

During the chat, Aniston also said her husband, Justin Theroux, surprised her during Thanksgiving.

"My husband, who's been away for almost a year it feels, surprised me on Thanksgiving and came home from Germany. It was really sweet," she said.

"We had just been together the week prior; I was going to London to do some work. His schedule was apparently 'completely booked' for the week, and he wasn't going to be able to come back."

As she was sitting down with friends for their dinner, Theroux walked in and: "Next thing you know, turkey walks in and there was another turkey holding that turkey. And that was my hubby."