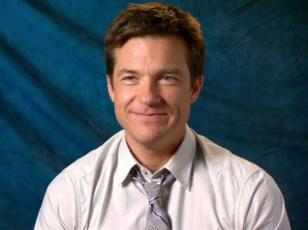 ) used her speech to playfully roast her friend.

"One thing has proven itself to be true and that is having longevity in this business is not easy. Especially starting out as a child actor. Usually that's a story that doesn't always end well. When I actually met Jason it was kind of looking like it could go either way," she joked.

Bateman's acting career began in 1982 with a recurring role on 'Little House on the Prairie' that led to the role that made him a household name on 'The Hogan Family'.

Aniston went on to recall a New Year's ski trip that she went on with Bateman.

"Picture this: It's New Year's Eve. It's just after midnight and there is a blizzard outside. I hear someone yell, 'Help! Someone Help! Jason. Car. Someone could die.' So we run outside to help him and what we see is, we have two feet of snow, Jason is in a truck fishtailing away down a one-way street hanging with the door wide open, hanging half way out of the car."

"His foot was out trying to stop the car kind of like Fred Flintstone. It's still not clear what you were doing, a little foggy right? You don't remember. Thankfully he outgrew those days of terrifying people."

Of course, she couldn't end her speech without complimenting him.

"The part that I'm really the luckiest, that I get to witness as his friend, is Jason Bateman the husband, the fantastic father, the dear friend and as we lovingly call him: Grandpa."

"He looks 12. He acts 100. A head of hair that women envy. He works hard. He's tired. Even in his most restful state, he's one of the loveliest men to be around. He always gives you deep connection, full attention, authenticity and some of the deepest belly laughs that I can remember. We are so very proud of you."