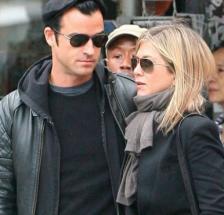 "As a child of divorce, all I can say is that's terrible news for those children, and that's all you can really say," he tells Business Insider.

"It's boring to sort of comment on anything else. People are having a bad time. That's horrible."

Theroux and Aniston married in 2015, a decade after she ended her marriage with Brad Pitt.

"There's an endless appetite for trash, apparently — though everyone would say that they don't have that appetite."

"But there are bigger things to bitch about. It's shocking how much bandwidth things can take up when there are far more important things going on in the world."

Theroux is currently making the rounds for his latest film, 'Girl on the Train'.

Meanwhile, Pitt has asked to skip a red carpet and won't be attending the premiere for Terrence Malick's 'Voyage of Time'.

"I'm very grateful to be part of such a fascinating and educational project, but I'm currently focused on my family situation," he says, "and don't want to distract attention away from this extraordinary film, which I encourage everyone to see."