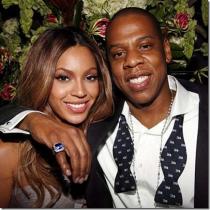 In a behind the scenes look at his upcoming album 'Magna Carta Holy Grail', Jay-Z talks fatherhood and wanting to make sure he can be a great dad to his daughter with Beyonce, Blue Ivy.

Jay-Z, who grew up in a single-parent household, tells record producer Rick Rubin: "It's most obvious on the song 'Jay Z Blue.' And it deals with—you know, my pop left when I was young so he didn't teach me how to be a man nor how to raise a child or treat a woman."

"It's the paranoia of not being a great dad."

In a second clip, talking about his song 'Heaven', he says: "For me, my idea is, heaven is in your daughter's laughter."