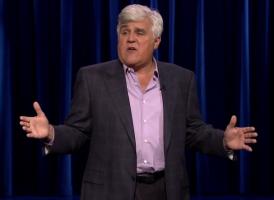 At the end of an interview this week, Jay Leno weighed in on the controversy surrounding comedian Bill Cosby.

Leno was asked whether he thought the whole Bill Cosby was sad.

"I don't know why it's so hard to believe women," he replied. "You go to Saudi Arabia, you need two women to testify against a man. Here you need 25."

"Stand-up is an art form that doesn't really change. Comedy is pretty consistent. The fat rich guy falling into the mud puddle has gotten laughs since the beginning of time."

"I think this whole Cosby thing," added Leno. "Hannibal Buress started it. He's a stand-up comedian and he made a flat-out statement that reverberated around the world."

"If that had been on television, it would have been edited. But because somebody would put the news out raw and unfiltered — which I think is fantastic — it was a great thing."