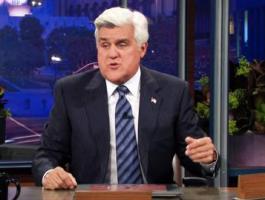 After Jimmy Fallon pretended to pull a hamstring during the monologue, Jay Leno tagged in to deliver a few jokes.

The former 'Tonight Show' host wasted no time using his material to poke fun at the 2016 presidential race.

"After that last debate, Marco Rubio is being called the best communicator in the Republican party, which is kind of like being the smartest Kardashian," Leno joked.

"The economy is so bad that parents in Beverly Hills are being forced to raise their own children — that never happens!"

When Fallon asked if Leno wanted to stick around to chat, he quipped: "I can't, I'm a lead guest on Colbert tonight."