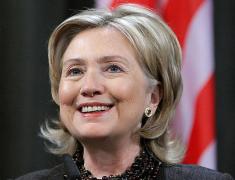 Jay Leno tags in for Jimmy Fallon on Wednesday night's monologue with some biting jokes targetting the Clintons.

"Got my first Robocall this week. It said 'Hi, this is Bill Clinton. Can Hillary count on you?,'" said Leno. "Count on me? She can't even count on Bill!"

"This email problem continues to dog Hillary but she says it was just an honest mistake. Ever notice when the people in Washington are honest is when they make a mistake?"

"But Hillary says she has been tested."

"I hope so," he quips. "You never know what Bill may bring home."

"You know what they call someone who digs up dirt on Bernie Sanders? An archaeologist."