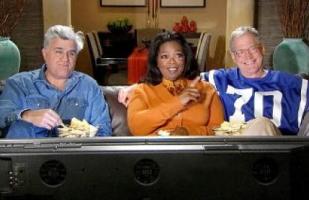 The former 'Tonight Show' host now says it has made him realize there's an unfair double standard.

"I find it fascinating — how many accusers does he have now? 40? Well, 50 women come forward and people call them liars. And they go, 'Oh, you waited 40 years?'"

"Men waited 50 years to say, 'A priest touched me,' and they got 7 million dollars. How come we believe them and we don't believe the women? It does seem awful sexist to me."

"It does seem very unfair, and I'm surprised no one's ever made that analogy."

Leno also offers an interesting take on whether Cosby will ever be accepted again by the public.

"I don't know how you come out of there," he says. "But Americans will forgive anything except hypocrisy."

"I remember I had Charlie Sheen on and he said, 'Look, I like hookers and coke. What am I going to do?' And the audience applauded. It's terrible, but at least he's honest."

"As soon as you deny it, that's your downfall."