Jason Ritter and 'Two and Half Men's Melanie Lynskey Engaged 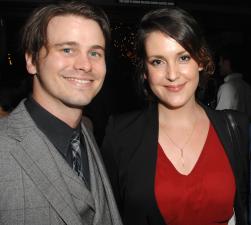 The 39-year-old actress, best known for playing Rose on 'Two and a Half Men', made the announcement in an appearance on 'Hollywood Today Live'.

Lynskey laughed that it wasn't an elaborate proposal and Ritter proposed "on the sofa... it was cute."

She said while they had been dating for four years after meeting on a movie, it came as a surprise.

Lynskey was previously married to Jimmi Simpson for five years. It will be the first marriage for John Ritter's son.