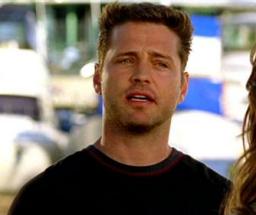 Jason Priestley once punched Harvey Weinstein during a confrontation at a 1995 Golden Globes party hosted by the producer's powerhouse company, Miramax.

Priestley confirmed the encounter after Canadian actress Tara Strong recalled the incident to Mira Sorvino, who heard Peter Jackson admit last week that Weinstein's company had blacklisted her and Ashley Judd from working on projects after they allegedly turned down his sexual advances.

"I was leaving when he grabbed me by the arm and said, 'What are you doing?' I said, 'You told me leave, I'm leaving'. 'I didn't say you had to leave,' he replied. 'You just told me to leave... right over there,' I tell him once again. Getting heated now."

"He then grabs me tighter and says, 'Why don't we go outside and talk about this.' That was all I needed to hear."

"'I'm not going anywhere with you,' I said as I pushed him back and punched him with a right hand to his face," Priestley wrote. "Suddenly, there were security guards pulling us apart and I was escorted out of the party."

Sorvino and Judd are among the dozens of women who have accused Weinstein of sexual assault and harassment. Salma Hayek (photos

) dropped a bombshell last week that she was also subject to the producer's abuse and he demanded her nude scene in 'Frida'.