Jason Biggs Apologizes To Tara Reid For Criticizing Her Body 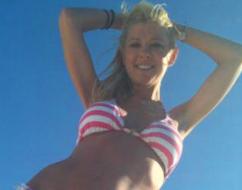 This after the 36-year-old appeared on Joan River's 'In Bed With Joan' and played along in a segment called 'Live or Die'.

Biggs was asked to choose between saving Lindsay Lohan (photos

Biggs also insulted Reid last year when during an appearance on 'Watch What Happens Live', the 'Orange Is the New Black' choose "Hot Mess" as her prison nickname.