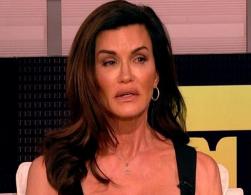 The list of women coming forward against Bill Cosby keeps growing. Former model Janice Dickinson says she was also sexually assaulted by the actor-comedian in 1982.

In an interview with ET, Dickinson says she first met the comedian after discussions of landing a role on 'The Cosby Show'.

She says Cosby invited her to Lake Tahoe, after she had been in rehab, to give her advice on her career and discuss the job.

Dickinson says Cosby gave her a glass of wine and a pill for her menstrual cramps.

"The next morning I woke up, and I wasn't wearing my pajamas, and I remember before I passed out thinking that I had been sexually assaulted by this man," she tells the program.

"Before I woke up in the morning, the last thing I remember was Bill Cosby in a patchwork robe, dropping his robe and getting on top of me."

"And I remember a lot of pain. The next morning I remember waking up with my pajamas off and there was semen in between my legs."

The former 'America's Next Top Model' judge says she even included the incident in the first draft of her 2002 memoir 'No Lifeguard on Duty: The Accidental Life of the World's First Supermodel'.

But Cosby's team got wind of it and his lawyers pressured her and publisher HarperCollins remove it from the book.

"Stuffing feelings of rape and my unresolved issue with this incident has drove me into a life of trying to hurt myself because I didn't have counsel and I was afraid," she says.

"I was afraid of the consequences. I was afraid of being labelled a whore or a slut and trying to sleep my way to the top of a career that never took place."

"I'm doing this because it's the right thing to do, and it happened to me, and this is the true story," she says. "I believe all the other women."

Asked what she would say to Cosby now, she says she would tell him: "Go f— yourself. How dare you take advantage of me. And I hope you rot."

Dickinson follows the claims of two other women who have come forward in the last week to accuse Cosby of rape.