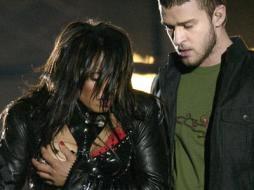 The hefty $550,000 fine that was levied against CBS television stations for airing a glimpse of Janet Jackson's breast during the 2004 Super Bowl broadcast has been overturned by a court.

The US Court of Appeals ruled that the Federal Communications Commission "acted arbitrarily and capriciously" in issuing the fine for Janet Jackson's breast-baring "wardrobe malfunction" (uncensored link).

The court said that: "The Commission's determination that CBS's broadcast of a nine-sixteenths of one second glimpse of a bare female breast was actionably indecent evidenced the agency's departure from its prior policy." Over 90 million people watching the Super Bowl heard Justin Timberlake sing, "Gonna have you naked by the end of this song," as he reached for Jackson's bustier and attempted to do just that.

CBS called the decision "an important win for the entire broadcasting industry" and said it was needed "because it recognizes that there are rare instances, particularly during live programming, when it may not be possible to block unfortunate fleeting material, despite best efforts."

Watchdog organization Parents Television Council is no doubt very unhappy with the ruling and in a statement asked: "If a striptease during the Super Bowl in front of 90 million people — including millions of children — doesn't fit the parameters of broadcast indecency, then what does?".