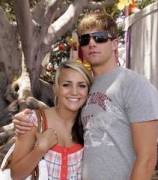 Jamie Lynn Spears has split from Casey Aldridge, the father of her 19-month-old daughter, according to 'Us Weekly'.

) made headlines in 2007 when she announced that she was pregnant at the age of 16.

Jamie Lynn, who had been starring in Nickelodeon's 'Zoey 101', and Aldridge had been dating since they first met at church. After the pregnancy was made public, rumors spread that she and Aldridge were engaged after she began wearing a diamond ring.

Soon after, she started wearing a shirt that read, 'The Rumors Are True'. However, it was thought to be for public consumption and the relationship was never really expected to last.

Jamie Lynn gave birth to daughter Maddie Briann in June 2008 at a hospital in Mississippi.

"I was right on schedule. I had a perfect pregnancy and a perfect delivery," she said following the pregnancy. "I was very blessed. It was such a big day. And being able to have your sister there, your whole family there, meant a lot. Everybody flew in to celebrate."

"I love taking care of her. It is so much fun. I just want to hug her and kiss her, and I'm happy all the time."

Her mother has since come out and said she first thought the pregnancy was a joke.

"She gave me a note that said she was pregnant and everything was going to be OK. She was going to raise it. I thought it was a joke. I was waiting for the punch line. I was in shock. I think I was just truly in shock, and then I started to cry. And she started consoling me at that point."