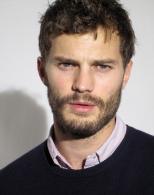 Just over a week after leading man Charlie Hunnam dropped out of the big screen adaptation of 'Fifty Shades of Grey', producers have found a replacement.

Dornan, a former Calvin Klein model, has starred in the British series 'The Fall' but he's best known to American audiences for playing the Huntsman in ABC's fairytale drama.

The 31-year-old actor had been linked to the project before Hunnam officially dropped out. Producers decided he was their man after he read with Dakota Johnson, who plays Anastasia Steele, last Friday.

Those behind the film were scrambling to find a replacement to avoid a delay of the November 1 production date. The film has a release date of August 1, 2014.