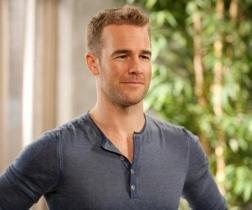 Van Der Beek will play FBI Agent Elijah Mundo, an expert in battlefield forensics recruited by Special Agent Avery Ryan (Patricia Arquette) for his war efforts in Afghanistan. Mundo is a savant when it comes to weaponry, vehicles and bombs.

A self-proclaimed action junkie, Agent Mundo will often put himself at risk to seek permanent justice, while Ryan will level his diehard behavior with her expertise in psychology as they team up to fight the world's toughest cyber crimes.

Van Der Beek, of course, began his career as Dawson Leery on 'Dawson's Creek'. He most recently starred in 'Friends with Better Lives', 'Don't Trust the B----- in Apartment 23' and guest starred in CBS' 'How I Met Your Mother' and 'Criminal Minds'

'CSI: Cyber' will revolve around Special Agent Avery Ryan who heads the Cyber Crime Division of the FBI. Peter MacNicol and Charley Koontz will also star.