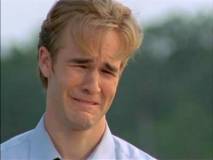 James Van Der Beek, who played the lead on 'Dawson's Creek', is apologizing to men everywhere for setting an unrealistic standard with his portrayal of Dawson Leery.

So to make up for it, he's wants to take the bar down a notch by offering himself up as an 'A–hole For Hire'.

"Hello men, my name is James Van Der Beek. For years I played sensitive do-gooder Dawson Leery on Dawson's Creek. Now you may not have watched the show but your girlfriend did."

"And for years she's been secretly comparing you to a very unrealistic standard. You see Dawson was sweet, kind, loving, eloquent, generous, romantic. He never made a move and always apologized, whether it was his fault or not."

"I'm makin' it right," he says as he feels up a girl's breasts, upsets a server and even tries to stop a wedding proposal.

In a second vide, the 33-year-old actor adds that he knows he's been mocked for years for his crying on the 90s the teen drama. But rather than shy away from it, he's joining in by creating even more hilarious emotional close-ups.

"The more I saw websites' mocking the sadness of others, the more I realized what the Internet was really demanding: more intense emotional close-ups of my face."

So he created looks that capture everything from the "Lilo eye roll", to the "eager beaver," and the "10 year anniversary crying edition."

Check out both videos below: