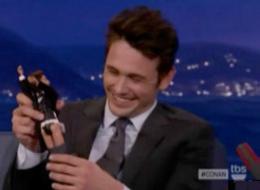 ) claimed ended up with the two in bed together.

“Once upon a time a guy, a Hollywood guy, read some Salinger to a young woman who hadn't read him before,” Franco writes. "Let's call this girl Lindsay. She was a Hollywood girl, but a damaged one."

"The Chateau was her home, and the staff were her servants. She got my room key. One night she came in at 3 AM. I woke up on the couch, trying not to look surprised. Instead of f--king her, I read her a short story about a neglected daughter. Every night Lindsay looked for me."

"I knew that she would like Salinger, because most young women do. Now we were lying in bed. I wasn't going to f-—k her. She had her head on my shoulder. She started to talk. I let her."

"For a while, after her high hellion days, she couldn't get work because she couldn't get insured. They thought she would run off the sets to party. Her career suffered, and she started getting arrested (stealing, DUIs, car accidents, other things). But the arrests, even as they added up, were never going to be an emotional bottom for her, because she got just as much attention for them as she used to get for her film performances."

Should there be any doubt that Franco is talking about Lindsay Lohan, the story matches up perfectly with what he told Howard Stern earlier this year.