James Franco Addresses Recent Accusations Against Him On 'Late Show' 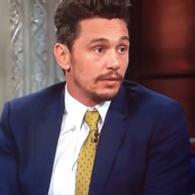 James Franco talks about recent accusations and criticism directed toward him after he wore a pin in support of the 'Time's Up' movement at the Golden Globes.

"Why is James Franco allowed in?," asked 'The Breakfast Club' actress Ally Sheedy on Twitter. "Said too much. James Franco just won. Please never ever ask me why I left the film/tv business."

In the now deleted tweet, Sheedy, along with some others, used the #MeToo hashtag, implying they were victims of Franco.

"Okay, first of all, I have no idea what I did to Ally Sheedy, I directed her in a play Off-Broadway. I had nothing but a great time with her, total respect for her. I have no idea why she was upset," Franco told Colbert on Tuesday night.

"The others... look, in my life, I pride myself on taking responsibility for things that I've done. I have to do that to maintain my well-being. I do it whenever I know that there is something wrong or needs to be changed, I make it a point to do it."

"The things that I heard that were on Twitter are not accurate, but I completely support people coming out and being able to have a voice because they didn't have a voice for so long," he continued, "So I don't want to, you know, shut them down in any way. It's, I think, a good thing and I support it."

"The way I live my life, I can't live if there’s restitution to be made. I will make it. So if I've done something wrong, I will fix it. I have to. I mean, I think that's how that works," he said.

"I mean, as far as the bigger issues, you know, how we do it, I really don't have the answers and I think the point of this whole thing is that we listen. You know, there were incredible people talking that night. They had a lot to say, and I'm here to listen and learn and change my perspective where it's off, and I'm completely willing and want to."

The New York Times has already canceled a public event with James Franco over the allegations.