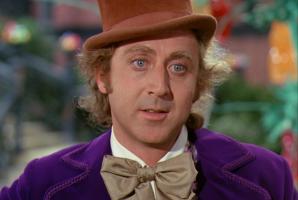 James Corden paid tribute to Gene Wilder on 'The Late Late Show'. The comedian died of complications from Alzheimer's disease at the age of 83 on Monday.

"He was never less than brilliant at all times," Corden said, as he recalled being "terrified" when the 'Young Frankenstein' star came to meet him backstage on Broadway.

"If anyone else came backstage they'd stay for five, six, 10 minutes tops. He sat in my room for half an hour and we sat on this couch and I'll never forget it as long as I live."

"And all he really wanted to talk about was how my wife and son were adjusting in New York and were we happy and was it fun. It was amazing and we exchanged emails."

Wilder began his career on stage. His first major role was as Leopold Bloom in the 1968 film 'The Producers', for which he was nominated for an Academy Award. However, he's best known for his portrayal of Willy Wonka in 1971's 'Willy Wonka & the Chocolate Factory'.

Corden revealed he was wanted to a 'Willy Wonka & the Chocolate Factory' sketch on his first episode of the 'Late Late Show', where he would find a golden ticket but it had to be scrapped after Wilder politely declined.

"I sent him an email, asking if he'd come and do a bit in it and he sent me an email back where he, in the history of people saying no to things, it couldn't have been nicer."

The response was: "Dearest James, I don't do or go where you were hoping, but I'll be looking for you. With my love, Gene."

"Even the way he said no was so poetic, even his emails sounded somehow like Willy Wonka," Corden explained. "The truth of it is, he was just this magical person and he made everybody around him feel this incredible feeling of joy."

"Thank you so much for everything you gave us, Gene Wilder, you are loved and you are going to be so dearly, dearly missed."