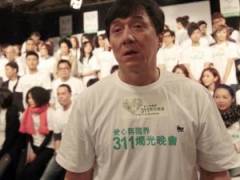 Jackie Chan's Hong Kong music concert '311 Love Beyond Borders' was a huge success after it raised over $3 million for Japan earthquake and tsunami relief.

The veteran movie star was joined by performers from Taiwan, China, Japan, South Korea and Indonesia for the concert which featured a song called 'Succumb not to sorrow', based on a popular Japanese poem.

The charity show took in more than $3.5 million in donations in just three hours, both through attendance and phoned-in pledges.

"We tried to wait and see what we could do to help, but the situation just got worse and worse," Chan tells THR. "For years, my Japanese fans have made a great effort to raise money for my charity, to build schools in China and to help the victims of the Sichuan earthquake. It was time for me to return the favor and do what we can to help."

Chan estimates he has donated more than $12.8 million to charity over his career.

"The worst thing would be to ask others to give but not give yourself. My goal is to have a $0 in my bank account the day I die."

"I get very happy when I think about that, no more worries. I buy the things I like, I give money to charity, and then I try to make more money. I'll be frank with you, it's not difficult for me to make money. If it's easy, why shouldn't I give it away?"

As for leaving his fortune of his son, aspiring singer Jaycee Chan, the actor says he shouldn't need it.

"If he is capable, he can make his own money," he explains. "If he is not, then he will just be wasting my money."