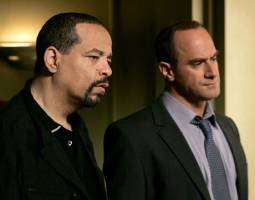 A day after it was announced that Christopher Meloni won't return when NBC's 'Law & Order: Special Victims Unit' comes back this fall, Ice-T says he was caught off-guard by the news.

Meloni, who had played Detective Elliot Stabler on the series since it debuted in 1999, and Universal Media Studios were unable to come to terms on a new contract.

"I was surprised," co-star Ice-T tells 'E! News'. "We all negotiate separately... I'm not somebody who's dying to leave the show, but at the end of the day you still have to sit down with the execs and hammer it out."

"So I guess with Chris, it didn't go his way. I'm sad though. Me and Chris have been together a long time."

But the former rapper says he understands how negotiations can turn sour, especially where stars of the show are concerned.

"You gotta understand, when you're No. 1 or on those shows you have no life," he explains. "I mean, they're working 14 hours a day. They're not being greedy. It's really hard."

As for reports that Jennifer Love Hewitt (photos

) will join SVU as the new female lead, Ice-T doesn't know if it's true.

"Jennifer is somebody that we've been circling," said NBC chief Robert Greenblatt in a weekend interview. "I don't know if that's going to ultimately come to pass or not but we just want to keep refreshing these concepts especially the older that they get."

"Mariska also just adopted a child and we're not sure beyond this next season where we'll be with her so we're looking at a lot of different options."