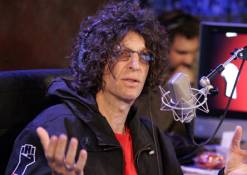 Howard Stern talks about Harvey Weinstein with Jimmy Kimmel and wonders "when did this guy have time to make movies?"

Stern then laughs at the faulty logic in Weinstein's plan of a fat man telling women to watch him shower naked.

"Now, I'm a man and, if you saw me naked, you'd throw up," he says. "There's no girl on the planet that wants to see Harvey Weinstein naked and would get aroused. If I was Harvey Weinstein, I'd wear a burka and say 'Listen, you don't have to look at me.'"

"Who puts this logic together?," he asks.