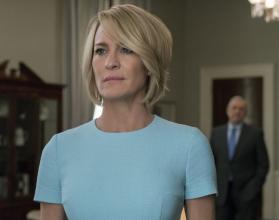 The final season of 'House of Cards' will feature female lead Robin Wright, completely pushing aside Kevin Spacey out of the series.

Production on the Netflix drama had been halted since Spacey was accused of sexual assault and harassment by more than a dozen on the set of 'House of Cards' after an actor who revealed he was 14 when Spacey made a sexual advance.

Spacey had been filming episodes as Frank Underwood when the news broke. However, the final season will now be rewritten to center on co-star Robin Wright.

There had been reports last month that writers were contemplating killing off Spacey's character as a way to deal with his exit.

The final season, which will be shorter with just eight episodes compared the standard thirteen episodes, will resume production in 2018.

Spacey was also fired and replaced by Christopher Plummer in Ridley Scott's drama 'All the Money in the World', leading to last-minute reshoots to seamlessly scrap the actor from the entire film before its December 22 release.