'House of Cards' Cancelled As Fallout Continues For Kevin Spacey 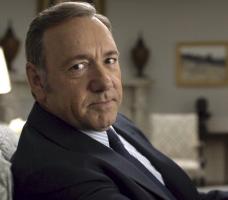 The 'House of Cards' is coming down in more ways than one.

A day after actor Anthony Rapp accused Kevin Spacey of making a sexual advance at him when he was 14, the streaming service announced that the popular political drama will end after its forthcoming sixth season.

The decision to wrap the series has reportedly been in the works since the summer. However, Netflix made the announcement on Monday with Spacey in the midst of a sexual assault scandal.

Spacey apologized for "deeply inappropriate drunken behavior" before admitting he didn't remember the incident and revealed he was gay.

Several others have since come forward to allege similar experiences with the actor. And others are furious that Spacey tried to "hide under the rainbow" to deflect from the allegations.

"In response to last night's revelations, executives from both of our companies arrived in Baltimore this afternoon to meet with our cast and crew to ensure that they continue to feel safe and supported. As previously scheduled, Kevin Spacey is not working on set at this time."

"Anthony Rapp's story is deeply troubling. During the time I worked with Kevin Spacey on House of Cards, I neither witnessed nor was aware of any inappropriate behavior on set or off," he says.

"That said, I take reports of such behavior seriously and this is no exception. I feel for Mr. Rapp and I support his courage."

'House of Cards' was instrumental in putting Netflix on the map as its first original content series.