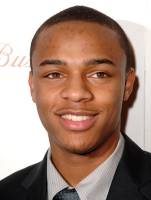 CBS is continuing lining up names for spin-off 'CSI: Cyber'.

Moss will play 19-year-old hacker Brody 'Baby Face' Nelson, who has been ordered by a judge to work with Special Agent Avery Ryan (Patricia Arquette) "on loan" to assist with a cyber case.

With stakes of assist or go to prison, Nelson reluctantly assists agents. His hacker claim to fame on the show? Hacking into the stock exchange and wiring half a billion dollars to his bank account.

"Bow Wow is a gifted young actor who will have the responsibility, through his character, to set an example for young people who watch the show to 'do what's right' even when you know 'nothing but wrong,'" says creator of the show, Anthony E. Zuiker.

"It will be a redemption story and a cautionary tale all wrapped into one. The role of Nelson required someone with deep acting chops and off-the-charts smarts. Shad Moss is a unique talent that possesses both."

Bow Wow is also in the Guinness Book of World Records for being the youngest rapper to have a #1 hit, with his 2000 song 'Bounce with Me' at 13 years old.