Hillary Clinton Interviewed By Zach Galifianakis On 'Between Two Ferns' 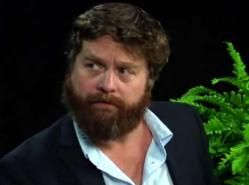 Hillary Clinton took one of the chairs on 'Between Two Ferns' to be interviewed for an always uncomfortable but hilarious chat with Zach Galifianakis.

Probably not understanding her role as Secretary of State, Galifianakis asks Clinton: "As Secretary, how many words per minute could you type? And how does President Obama like his coffee?" Like himself? Weak?"

"You know Zach, those are really out of date questions," she replies. "You need to get our more

"What happens if you become pregnant?," he follows up. "Are we going to be stuck with Tim Kaine for nine months? How does this work?"

"I could send you some pamphlets that would help you understand," she says.

When conversation turns to Donald Trump, Clinton says she wouldn't leave the country if her rival wins.

"I would stay in the United States and try to prevent him from destroying the United States. I wouldn't take up arms. I think that might be a little extreme," Clinton added. "I really regret doing this."

Zach later asked Clinton what she would wear to Monday's debate. She said she hadn't decided yet but imagined Trump would probably wear a "red power tie."

'Between Two Ferns' even aired a Trump ad during a commercial break.

"He paid me in steaks," the host replied.

"I'd be afraid to eat them if I were you," Clinton warned.