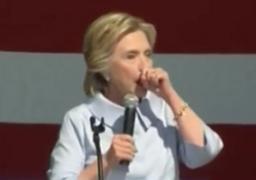 Hillary Clinton had to interrupt her rally on Monday due to another coughing fit -- but the Democratic presidential nominee blamed it on GOP rival Donald Trump.

"I've been talking so much," Clinton said with a hoarse voice in the midst of her coughing outbreak in Cleveland. "Every time I think about Trump, I get allergic."

Clinton's running mate Tim Kaine clapped his hands behind her while the audience laughed.

The spell left Clinton almost unable to finish her remarks. Following the event, campaign aides attributed it to allergies.