Helen Mirren: I Didn't Have A 'Taste For Marriage' Before Meeting Husband 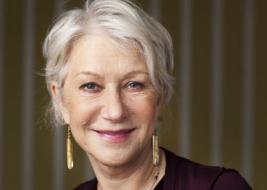 Helen Mirren has been married to Taylor Hackford have been together for nearly two decades.

But the actress says she wasn't looking to get married even as she approached 40.

"I did very consciously choose my work over my relationships right up to the time that I met Taylor," she tells AARP Magazine. "I was 38 when I met Taylor, pretty late in life."

"We got married in the end because we realized that we were going to be together forever."

"I always said I have nothing against marriage. It just wasn't to my taste, like turnips. It took me a very long time to come around to acquiring the taste. I just had to meet the right turnip."

"We got married, ultimately, for legal reasons more than anything else. Estate planning and other complicated things like that," she admits. "And our families, we sensed, wanted us to be married."

Mirren, 71, is also asked about the best thing about being over 70.

"The best thing about being over 70 is being over 70," she laughs. "Certainly when I was 45, the idea of being 70 was like 'Arghhh!' but you only have two options in life: Die young or get old. There is nothing else."

"The idea of dying young when you're 25 is kind of cool—a bit romantic. But then you realize that life is too much fun to do that. It's fascinating and wonderful and emotional. So you just have to find a way of negotiating getting old psychologically and physically."